The maintenance of the large aging infrastructure in Wallonia and across the developed world poses serious technical, environmental, and economic challenges.

Goals of the research

According to data from Service public de Wallonie (SPW), 13% of the bridges (669 structures) suffer from serious degrees of corrosion, while the resources for their rehabilitation are limited. The corrosion in concrete bridges typically occurs due to carbonation, chloride ion ingress or sulphate reaction in the most exposed zones of the bridge, see Fig 1a. To rehabilitate these zones in a sustainable and cost effective manner, a solution using a new generation of materials – ultra-high performance fibre-reinforced concretes (UHPFRC) with compressive strength between 150 and 200 MPa – has emmerged in the past 20 years [1]. UHPFRC materials are characterized by outstanding mechanical properties as well as high durability due to their extremely low permeability [2]. Furthermore, a recent life cycle assessment study has shown that the retrofit of bridge decks with UHPFRC has lower global warming impact than traditional methods [3]. As shown in Fig. 1b, this self-leveling material is cast in thin layers on the deck and around the bridge piers to protect the structure from corrosive environment and significantly extend its service life. In addition, the UHPFRC layers can be used to increase the stiffness and strength of the structure, which is often necessary due to material degradation, increased traffic loads, construction/design errors or damage due to accidental loads. 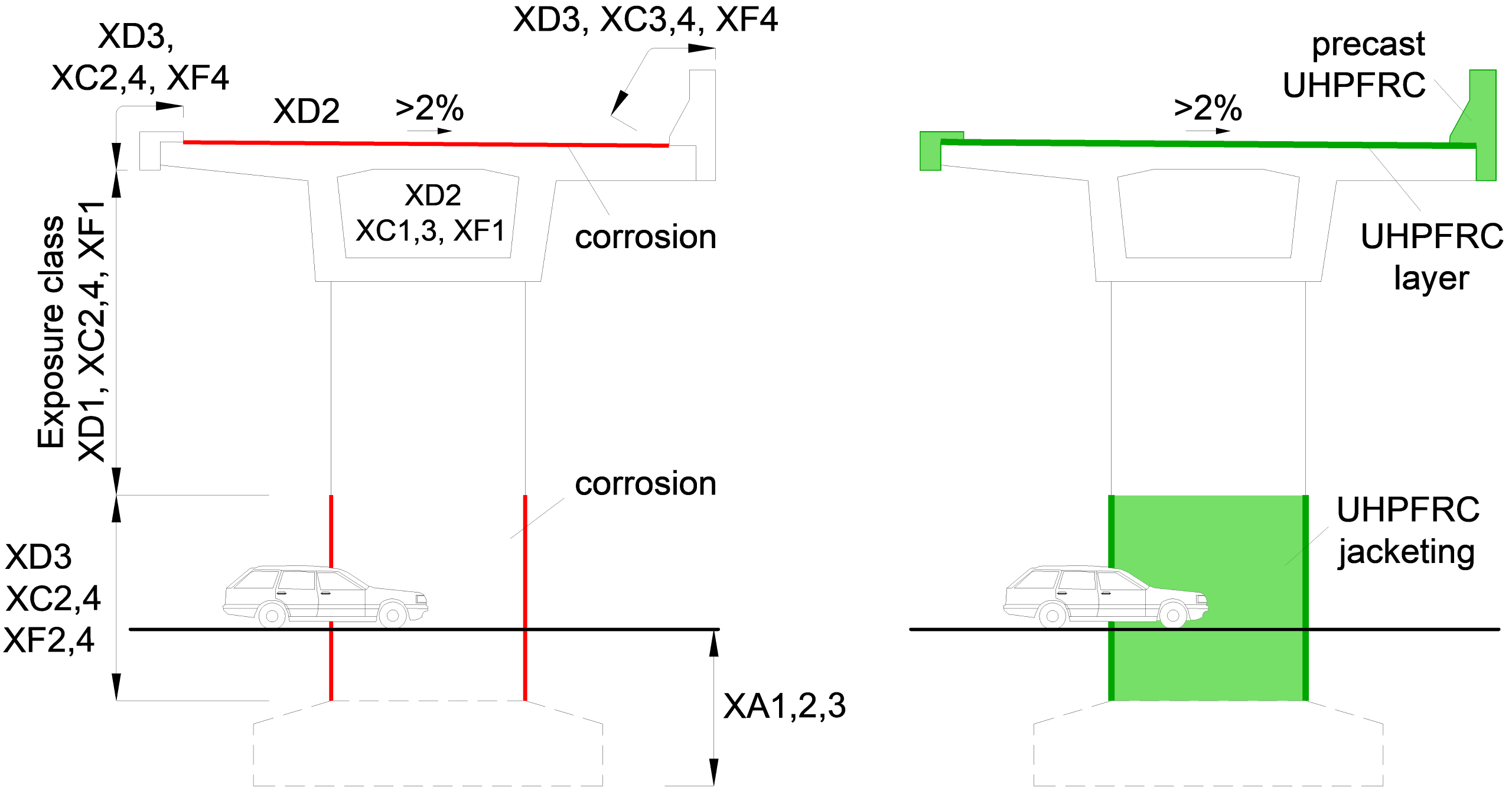 This project focuses on the UHPFRC rehabilitation and strengthening of wall-type bridge piers, and in particular on the zones of the piers above the foundations (Fig. 1b). These zones are often exposed to aggressive soil water or deicing salts resulting in corrosion of the reinforcement and spalling of the concrete cover, see Fig. 2a. The corrosion reduces the section of the horizontal shear reinforcement which is closest to the surface of the member and has relatively small bar diameters. The reduction of shear reinforcement is often in addition to already deficient shear design performed according to past design codes. In this regards, layers of UHPFRC cast on the surface of the bridge pier can both stop the corrosion process and strengthen the pier against brittle shear failures. The strengthening effect is mainly due to the outstanding tension behaviour of UHPFRC characterized by high tensile strength (7-15 MPa vs. ~2 MPa for regular concrete), microcrack control, and significant ductility. These properties can be tailor-designed by the amount and orientation of the steel fibers in the UHPFRC (typically 3-6% per volume). The fibres bridge the shear cracks shown in Fig. 2b, and in this way increase the shear resistance of the pier.

While UHPFRC layers can provide an excellent retrofit solution for bridge piers, research has focused mostly on the rehabilitation and strengthening of slabs and beams. In particular, there are limited experimental studies confirming the technological feasibility of thin UHPFRC layers, and no tests focused on the shear resistance of UHPFRC-retrofitted piers. Furthermore, no simple rational models are available to engineers for calculating the shear strength of retrofitted piers under the simultaneous action of bending and vertical loads.

Therefore, this project is aimed at addressing these gaps in knowledge and facilitating the use of UHPFRC for the retrofit of bridges. The main objectives of the project are twofold: 1) to confirm the technological feasibility of UHPFRC for the rehabilitation and strengthening of wall-type bridge piers; 2) to develop a rational practical model for evaluating the shear resistance of piers with UHPFRC layers.

The experimental part of the project will consist of the construction and loading to failure of two large wall-type piers with and without UHPFRC layers. Detailed measurements of deformations and forces will be used to understand the shear behaviour of piers and the effect of the UHPFRC layers.

The results from the tests will also be used to validate a numerical model for the analysis of UHPFRC. This model will be developed by modifying a smeared rotating crack model for fibre reinforced concrete implemented in a finite element (FE) formulation. Both the experimental results and FE simulations will be used to develop a rational mechanical model for the shear behaviour of UHPFRC-strengthened piers by extending a three-parameter kinematic theory (3PKT) for reinforced concrete piers. As the 3PKT is based on first principles, it is expected to provide the basis for models of other important structural members such as deep beams, coupling beams, and pile caps. The ultimate goal is these models to be implemented in future design codes in order to facilitate the use of UHPFRC for the retrofit of critical infrastructure.