These researches are part of the GAS workpackage of EURAD – European Joint Programme on Radioactive Waste Management.

The scope of the PhD thesis covers the numerical investigation of gas transfers both in the EDZ and in the sound rock mass, with the objective of developing, validating and applying numerical tools able to reproduce these gas transfer mechanisms.

Nowadays, the deep geological disposal is considered as one of the most promising solutions for the safe storage and long-term management of long-lived high- and intermediate-level radioactive waste. This mode of repository is based on the multi-barriers confinement concept, offering a series of engineered and natural layers, designed to delay the radionuclide migration on a time-scale consistent with the radioactive decay period. Among the numerous physical couplings occurring during the successive storage phases, the question of gas transfers in low-permeable formations is a crucial issue. 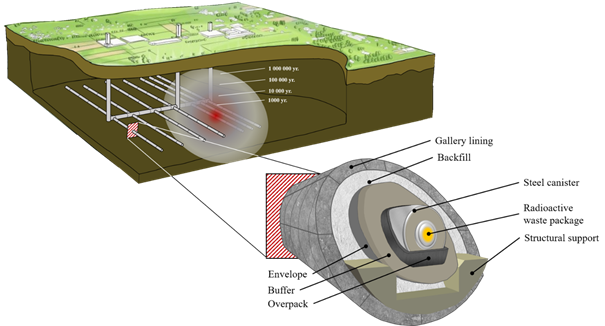 Among the potential sources of gas which could actually exist after the sealing and closure of the galleries, hydrogen from the anoxic corrosion of metal components is certainly the gas which can be released in the largest amount.

In an ideal situation, the gas generated in the nearfield of a repository would all dissolve in the groundwater to be transported away from the storage zone by the mechanisms of advection, diffusion and dispersion. However, the repository host medium is characterized by a very low permeability, which is the main reason to study those deep rock layers, and which can be problematic when considering gas migrations. In such layers, the gas transport by diffusion will probably be insufficient to evacuate the gas generated in the nearfield. If it is indeed the case, then a gas phase will be formed in the nearfield and the gas pressure will rise. If the gas pressure magnitude becomes greater than the minimum principal stress acting on the rock, it seems plausible that micro-fractures ("preferential gas pathways") develop through the rock mass, compromising the safety function of the clay barriers.

Finally, a distinction can be made between the gas flows through the Excavation Damaged Zone (EDZ) created in the surrounding of the storage galleries by the underground process and the gas migrations through the sound rock layers.

Considering first gas migrations in the EDZ, a numerical model is elaborated in such a way as to be able to reproduce simultaneously the excavation damage around the gallery as a strain localisation process in shear band mode, and the multiphysics couplings associated with gas generation and migrations.

As for gas migrations in the sound rock layers, a multi-level approach will be envisaged. The development of localised gas pathways under increasing gas pressure will indeed require to consider a lower scale taking more particularly the multi-scale interactions proper to gaseous migration in an undisturbed confined medium into account. The model will be built in the framework of the finite element squared method, using a fine scale Representative Elementary Volume (REV) for the pore network which makes possible not to model all the microstructural details for the full domain. The response to loading of the REV is linked to the macroscale by employing homogenisation equations. And finally, the boundary value problems are solved at both scales using a finite element method.

Through the proposed innovative developments, the challenge is to better understand the impacts of gas transfers on the behaviour of argillaceous materials and their insulation characteristics, with a view to improving the multi-barrier confinement concept, and thus the long-term management of nuclear wastes.